A book by Ian Fenn

“This book was a brilliant discovery on Amazon and I simply couldn’t put it down!! It is compulsive reading from end to end and then over again, making you hungry to absorb more. It is profound, elusive and whimsical, with shades of The Hitchhiker’s Guide to the Galaxy kind of genre. It has left me with a greater curiosity to explore my own wanderings of the mind, whereas many books on so called enlightenment merely seem to stagnate the thought process, or lead one into dead end scenarios. I look forward to reading the next book by Ian Fenn.”

EXCERPT FROM THE BOOK 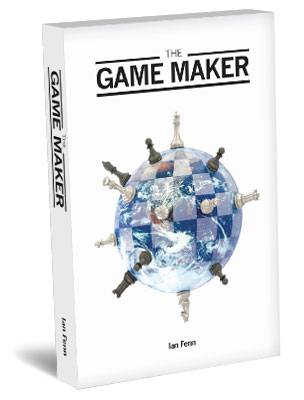 The trouble with time really starts when you are crossing off each million years as they pass, as I am doing right now. It really can be like watching paint dry or, in my case, waiting for the first sign of intelligent life to appear in this Milky Way galaxy.

I have been here from the very start of this galaxy and all the others. I was here before the first stars had yet to form, which I know to you might seem to be a very long time. It has, by comparison, been a mere blink of an eye since the first human appeared on the Earth. This appearance was one event for which I had been waiting patiently, and when it finally did happen, I could at last begin work on the planet Earth, part of my quest. Not that the appearance of humans hailed the arrival of anything approaching true intelligence, but to be fair to you all, that is not really possible given the rules of the game. When you understand what a human being really is (which this book will explain) then you will understand that nothing you believe in is what it seems, and I don’t mean in some mystic way; I mean it really is not at all what it seems.

If you are thinking I am being rather unfair or even arrogant saying that there have been no intelligent humans then perhaps I should clarify what I mean by intelligence. The intelligence I speak of is that of an immortal being who knows exactly who and what they are, a being operating in total consciousness. This type of consciousness is only possible outside of this universe and is far beyond what is commonly known here on Earth as enlightenment.

If you have spent your life striving for enlightenment, that idea may not be easy to accept but, nonetheless, it is truth.

This will all make perfect sense to you if you continue to read; trust me: after you finish this book, you will be clearer on who you are and why you are here, and you will see why absolutely nothing made any real sense without the information you are about to discover, and that includes enlightenment.

I have, over the last thousands of years, spoken to many humans about immortality and how tough and, at times, boring it can be. You can imagine that they often think I am ungrateful and that the gift is wasted on me. They then become certain that I must be some kind of fool when I tell them that the reason I came to this universe was to spend a few billion years simply for my own amusement and that it really does not have some special meaning or reason for existing at all. I understand this reaction, as it seems rather irreverent and dismissive of the miracle of creation or somehow devaluing their life’s purpose.

When you have so little time as you humans do then you cannot be blamed for overvaluing its place in the grand scheme of things. However, it is my hope that, after reading this book, you will understand more about what it means to be immortal and you will also see why the Game Maker is one of the most popular immortal beings ever to create himself. You will also see why a visit to sample his skills is an inevitable event at some point in eternity.

You have, as a human, only about seventy to eighty years of life to endure, and yet I often hear thoughts about how bored you can get; well, my friends, try living for a billion-trillion years, just for starters, and then talk to me about boredom. Seriously, have you got even the slightest idea how long forever is? Have you ever sat for just a few hours and boggled your mind with what it means? Have you spent any time at all pondering what eternity feels like?

Okay, it is probably a daft question to ask a being who is stuck in a body with a tiny lifespan; maybe I can help with some clarifying imagery. Imagine, if you will, a very hard piece of granite rock, just like the sort you make your kitchen countertops from, and now imagine one of these the size of a galaxy. Then imagine the length of time that the water from one dripping faucet would take to wear this galactic rock down to nothing. This universe will almost certainly be over before that could occur. Got that length of time fixed in your head? I’m guessing you will be struggling to get your mind around it, as it is more than most can comprehend, but please keep going. Now, let us multiply that mindboggling time by a billion or so and you are not even slightly close to what eternity feels like.

The alternative to being aware of these massive lengths of time is the sleeping state of oneness that some earthly philosophers and mystics have imagined or glimpsed briefly and then attempted to explain as a place where there is no time, or that perhaps all of time exists in a single moment of now. This is not entirely true; it is more of a place where there is nothing at all, no story to follow, and no consequences (consecutive sequences), but it is nevertheless a handy place to go for a break from the constant movement of a universe of time. It can be relaxing for a while but the lack of stable, solid creations to play and interact with is only appealing for a while. Like I said, it’s nice for a break. Thinking of this makes me want to take a relaxing, long snooze. Would you excuse me for a moment?

This self development review is not about yet another book with rules on how to resolve your personal problems or change your life. The Game Maker by Ian Fenn is a light-hearted look at the universe, Big Bang, consciousness, enlightenment, life after death, eternity and your immortality. It makes you consider what life is all about. It suggests an answer to your deepest questions and discusses a game that each one of us plays and how you play it.

The book draws you in slowly. At first you are not sure where it is heading but by page 30 or so you begin to understand. At around page 100 everything starts to fall in place. In a way, this self development book could be looked on as a soliloquy. What is intriguing is WHO is speaking to the reader.

The Game Maker – What it covers

This book is, in essence, an explanation of what life is all about and who you really are. It discusses if your life does indeed have a purpose. Ian Fenn covers the rules behind all games and in particular, those of the greatest game of all.

It is a fascinating journey into what happened before the Big Bang, what occurs after the collapse of the universe and why scientists may never never truly understand the events that take place around the whole subject. You are made to think deeply about the gas, liquid and solid states of your (and others’) existence, and the effect on it of more compression or less compression.

The Game Maker does not discuss life after death in the usual way. It makes you look at it from a completely different standpoint. You realise that “intelligence” is “far beyond what is commonly known here on Earth as enlightenment.” The book makes you consider what it is like to play a game if you are immortal and ‘time’ has no real meaning.

This book is not for everyone and it is certainly not for you if you are not open to new ways of thinking or to new concepts. It is not for hardnosed scientists or philosophers either. Also, some sentences are quite long (10 lines or so) and it needs an intelligent brain to keep in mind how those sentences began. However, this is one of the charms of The Game Maker.

The Game Maker by Ian Fenn is a self or personal development book that makes you consider what life is all about. I particularly liked it as it is not written from the author’s point of view – as you eventually find out. It is a light-hearted look at the universe, Big Bang, consciousness, enlightenment, life after death, eternity and your immortality, and suggests an answer to your deepest questions. Ian Fenn is an entrepreneur and founder of many businesses. An adventurer with a true zest for life he has won two UK motorcycle racing championships, sky dived, sailed the barrier reef, trekked in jungles, is a scuba diver and lover of art, science and philosophy. He tells that his personal search for the meaning of life started at 3 years old when he found he could pop easily out of his body.